Author's Note: This is an excerpt from Ava Noelle and the Unveiling of Wendigorium, starring the fictional character, Ava Noelle Macintyre. Included in the excerpt are Stephanie (Steph) JoAnne Galanos  and the deaf orphan Jordyn. Both characters were featured in the thrilling    adventure, The Spirit Within: Tale of a Fearless Heart. In Ava's novel, Jordyn is communicating with Ava and Steph telepathically. We join Ava and Steph as they stand near a yawning, spiral staircase in the middle of a gloomy, dark Tower. 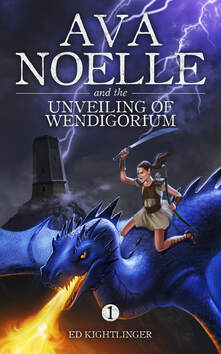 Hold on a second,” I whispered. “You have never met Jordyn in person? Yet, she spoke to you, I mean, communicated with you telepathically – like she did with me?”

"Then she moved me back across time and space to the mid-1960s where I befriended a handful of unforgettable people, like I had in Germany and before the Civil War. One was a handsome teenager who had cerebral palsy. Finally, she moved me back in time to an orphanage that dated back to the early 1900s. Just about the whole time, except for a brief period when I was in the 1960s and at the orphanage, Jordyn communicated with me telepathically.”

“I cannot believe all of this!” I whispered. “I mean, I want to believe you, Steph. After all, why would you lie to me, especially considering we’re standing here in the middle of this Tower. But I cannot even begin to imagine how incredibly exciting it would have been to go back in time. I’ve always dreamed of going back in time. Actually, I obsess about it more than I should.”

What I blurted out next was in a doubting tone. I was shocked with my choice of words.

“Then again, how can all of that be true, Steph? How is it possible you traveled back in time, across centuries? I mean you’re still a teenager. At least I think you are. Also, as you say, while traveling across time and space Jordyn was communicating with you telepathically.” I sighed and shook my head disbelievingly. I could not bring myself to believe what she had said. It sounded too exciting, too unbelievable to be true.

“Please excuse my saying this, Steph. While I see no reason why you would lie to me, what you have said sounds too unreal to be true. Yes, I love fantasy tales and adventure stories. I love reading about dragons and other fantastic creatures. However, what you said sounds like something from a fairy tale, like it's made up.”

The sudden, saddened look on Steph's face immediately made me feel miserable. I was certain I had insulted her because I almost came straight to the point. Without saying it straightforward, I was suggesting that she was lying. As Steph and I stood staring at each other, I got to thinking.

There I was, dab smack in the middle of the Tower, surrounded by darkness and only God knows what else. A scary spiral staircase that descended into the depths of the Tower was but a couple feet away from where I stood. That Steph was standing with me in the darkness should have put me at ease and given me an iota of faith, not to mention trust. And what was I doing?  I was insulting her, calling her a liar! I was enormously embarrassed with what I had said to her. How could I have been so insensitive?

I meekly smiled at her for the briefest moment. Then I stared at the floor. I shrugged my shoulders and shook my head a few times. I was disappointed with myself. I mumbled, “I’m sorry if I insulted you, Steph,” or words to that effect. “What I said probably came across like I was calling you a liar. I didn’t mean it, and I’m sorry if I offended you. Please forgive me?” I looked up from the floor. Steph was smiling.

“No problem, Ava. You’re the only person I have ever told about my encounters with Jordyn and my exciting adventures across time and space. I cannot blame you for being skeptical. I would feel the same way if I were in your shoes.”

To say I was relieved that Steph was not angry with me is an understatement.

I said in an excited tone, “Were you able to reply to Jordyn telepathically? I mean, did the two of you have two-way conversations like I believe I experienced with her a few moments ago?”

“Yes, we had two-way conversations, at least most of the time. Thank God we did because when I was Nazi Germany, soldiers had attacked me physically. Others were shooting at me too. Without Jordyn's guidance and support I would have been, like I said, a goner. And, of course, there was the time that the evil owner of a plantation pointed his rifle at me.” She seemed to tremble ever so slightly. “That was even scarier. I was certain he was going to shoot me!”

I recall that I shook my head a few times, and then I mumbled quietly, more to myself than for Steph’s ears. “I cannot believe this is happening to me.”

“What was that, Ava?” Steph asked softly. “I’m sorry. I did not hear what you said.”

“Oh, nothing,” I replied with a shrug of my shoulders. “It’s not important. I was just thinking out loud.”

Steph suddenly began to giggle. With a straight face I inquired, “What’s so funny?”

“It’s Jordyn, Ava. Jordyn recognized I wanted to know what you had mumbled, you know, before I asked what you said. I feel it’s important for you to trust me, to trust her.” She giggled once more. “Jordyn told me you said, and I quote, ‘I cannot believe this is happening to me.’” She cocked her head to one side. “That is what you said. Am I correct?”

“Totally,” I replied in amazement. “So, where is Jordyn, Steph?” I glanced around the dark Tower once more. “Is she here with us,” I pointed down the spiraling staircase that seemed to go on forever, “from where that eerie light is coming?”

Steph did not reply.
Click to read Ava's Prologue