Sneak Preview of the Prologue

~ To my dear friend, Taryn Brenae ~ 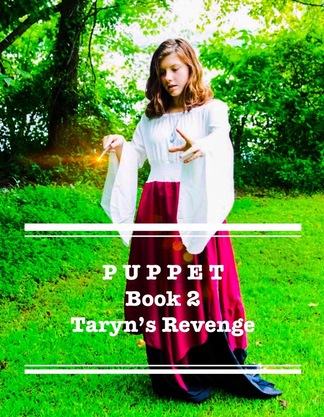 This is not the final book cover
PROLOGUE

“Everything that has happened may be nothing more than a game, a sick form of entertainment for a diseased mind.”
—Brenae Sharon Woodbine
As the title of this book implies, this is a tale about me, and a lifelike, teenage lookalike Puppet named Robert. If you haven’t read the first novel, Puppet, you should grab yourself a copy. That way you will have a full account of what led up to my part of the Puppet’s journey.

In any case, I must make you aware of a few things before we get too far into my story line.

First, please allow me to introduce myself. My name is Brenae Sharon Woodbine. My friends call me Bre. However, as you will soon discover, my first name was changed to Taryn due to a supernatural phenomena. I live in the sleepy town of Claymore, Tennessee. I am seventeen-years-old. I am home schooled in my final year of high school. I have great parents, a fun part-time job, recently bought my first car with my own money, and I am looking forward to setting out on my own. To some it may appear as though the world is a scary place with insurmountable challenges and fraught with frequent speed bumps along the way designed to slow you down. Not to me. I believe in myself, and I know I have what it takes to succeed.

Second, I have a nickname that you may find to be fascinating. I am commonly referred to as the Ventriloquist. I am skilled at ventriloquy, throwing my voice, and mimicking the voices of others.  I also have a knack for sleight of hand. For those of you who do not know what sleight of hand is, well, it’s considered a form of magic, even though it’s nothing more than trickery of the eye.

Third, as you will discover in this novel, I also am a Sorceress. More of that later.

Which leads me to Robert’s name. The name, Robert, is derived from the Porto-Germanic name Hrodbert, or “Hrōpi,” which means “fame” and “berhta” which means “bright.” “Bright fame.” For those who care about such things as it pertains to etymology, the female version of the name is Roberta.

The name Robert is fairly common. It was one of the top ten boys’ names in the United States over a 47-year period, from 1925 to 1972. Many notable people over the centuries have had the name Robert: Kings of Scotland, France, and Normandy; religious figures and saints; actors, musicians, scientists, and political figures.

There is one being, not surprisingly, a legendary, infamous figure, that had the name of Robert. It was Robertus Diabolus, or “Robert the Devil.”

Robert the Devil was a Norman knight who found out he was the son of Satan. His mother supposedly was a duchess of Normandy who wanted to have a child but could not. I will not go into the interesting details here about Robert the Devil. However, I encourage you to read up on the legendary character. A good point of reference is to Google the Italian writer Arturo Graf and his version of the legend that he detailed in his 1889 book LL Diavolo.

It is now time for me to cut to the chase as it pertains to our Puppet, Robert.

Robert’s real name is Robert der Däiwel (pUPA) or Robert the Devil. The pUPA portion of his name comes from his adopted parents, Reginald P and Molly Gertrude pUPA. In Latin, pUPA means puppet. Of note, Robert is also known as the Supreme Spectral Puppet.

Having said all this, I will now recap the last conversation I had with Robert. It wasn’t very pleasant to say the least. Robert was retelling the gruesome story of how he murdered one of our classmates. I wanted to ask him a question, but he stopped me cold.

“Not now, Bre. I am the one who is speaking. I do not know if you know this, but I killed the other Marvella’s before I murdered your classmate. You should have been there, Bre. You should have seen the blood. It was awesome!”

Despite my disgust with what Robert had said, I was about to ask him another question when he shouted, “Tough, Bre. You had your turn. As I said, I no longer wish to converse with you; so shut up!”

At that point, I was fed up with Robert’s deceit, his lying, and his murderous ways. He hadn’t even expressed an iota of remorse for what he had done! So, I goaded him on relentlessly. I wanted him to hate me because I knew it was the only way to offend the central part of his core, his cold-hearted, devilish soul.

I remember trembling from head to toe as I shouted into Chloe’s phone. Her phone was lying in the dirt in the middle of a circle of my fellow members of the Septet, a school-sanctioned, 7-member investigative team. We were on speaker phone, my friends and me on one end, and Robert on the other end. My words were hostile, and when I shouted them, they were rapid and snappish. They were like hateful bullets firing from my tongue. I wanted my words to sting!

“Who killed your father, Robert? Why was your father in Chloe’s house? Who or what demolished the entire block killing fourteen older adults and putting others into the hospital? Did you do it, Robert? Did you kill your father and those innocent people that were sleeping? Did you, you murderous butcher?”

I remember rolling my eyes and sticking my tongue out at Chloe’s phone. Robert has the magical ability to visualize everything that is occurring with whom he is conversing, to include reading his or her mind. I knew he could sense me sticking out my tongue at him, and he would be all the more furious! I did not care!

I shouted, “That’s right, Robert. As you can tell, like your detestable father, Puppet, aka the Loser, I have a nickname for you as well. After all, you can read my mind, am I correct? Yes, Butcher, you know your nickname, don’t you?”

Robert had replied angrily, “I said you had your turn, Bre! Shut up!”

I glared at the phone. “Answer the questions, Robert! I know that you want to. You alluded to your father abusing you and beating you. Get it off your chest, Butcher. Seek closure! Tell us if you killed your father.”

Robert’s voice was hysterical when he replied. It also was threatening, accusatory and now, when I reflect back at how hateful his voice sounded at the time, it scares me half to death.

I stuck my tongue out at the phone yet again. I wanted more than anything to annoy him, to make him fuming mad, to goad him on so he would confess everything! When I spoke my voice was calm with a measured tone that was accompanied by undeniable sarcasm and indisputable loathing.

Then my teammates started to provoke Robert, to have him confess, to tell all. However, unlike my mean-spirited manner, they were more conciliatory, calm, and understanding. We were playacting the “good cop, bad cop” routine, something an unfeeling, unemotional, inhuman puppet would not appreciate. Clearly, I was the bad cop. The six others were the good cops. Finally, when Colette, our Scottish-speaking senior had her say, Robert became much calmer. He began to confess his murders.

“Aye, Colette, Bre is correct. I admit it. I murdered my father. I hated him. I instantly engulfed the entire structure in which he stood with a massive whirlwind. I watched with glee as the three-story structure spun round and round until it gained incredible velocity. I had never achieved such a remarkable feat since my creation! The power I held in my hands was amazingly unbelievable, miraculously overwhelming! As I sensed the structure twirling rapidly within my magical invention, I knew right then and there I was unstoppable!

“Within a matter of seconds, I forced the adjacent two-car garage to pass into the whirlwind. I was enjoying myself immensely! I could not stop myself, Colette! Then I forced the three-story structure next to Chloe’s house to pass into the whirlwind. Before long, I had the entire city block, every structure, from the corner of Marigold Avenue to the corner of Richland Avenue, engulfed in my amazing whirlwind! It was incredible to witness. It was nothing short of a miracle!”

Robert suddenly stopped speaking. My fellow Septet members glanced wide-eyed at each other speechlessly. Assorted expressions of hate, disgust, shock, and sorrow showed on their faces. A few of them had watery eyes. I, myself, was crying. Then Robert said in a whisper, “It is unfortunate that others died. Nonetheless, everyone has to go sooner or later. Am I correct?”

What Robert had said literally broke my heart in two. But that was nothing compared to what he said next. He said to our team leader, Chloe, had she and her family been in her house when he destroyed it and killed his father, he would not have hesitated to kill her as well! To think he could so callously say that to my best friend made me furious! I recall saying more hateful things to him, and then he interrupted me yet again.

I replied something along the lines, “Because you are evil, Butcher! You kill for fun, you evil Butcher.” With a haughty laugh I added, “Do you want to know something else, Butcher?” After a few moment’s hesitation, he replied indifferently.

To the complete shock of everyone, to include myself, I suddenly reached into the center of our Septet circle and turned off Chloe’s phone. Yes, I had hung up on the creep! I knew in my heart he would not call us back. I had triumphed.

But had I really?
~~~
I hope you enjoyed this little snippet of my personal introduction to my upcoming adventure in PUPPET - Book 2: Taryn Revenge. ~ Love, Brenae (Taryn)