CHAOS - WAR OF THE WORLDS

Book 3 of the Enchanted Gate series

Snippet of Chapter One 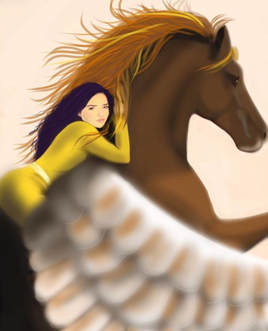 “Troop, into the air!” Lady Enna commands telepathically.  “I want my squadron to follow me to the east.  Clover’s squadron will follow her to the north.”  She pats her faithful flying horse, Spirit on his mane and says in a whisper, “I want to get these nasty creatures into a defensive mode as soon as possible.  Then we will destroy them.  We have not eaten breakfast, and you know me when it comes to breakfast and my morning dose of coffee.”  Although Lady Enna cannot read Spirit’s thoughts – Queen Lindsial and I are the only elves on Spardom that can read creatures’ thoughts – Spirit understands everything that Enna says.  He gallops a few dozen steps, and then he effortlessly spreads his massive wings to rise gracefully into the deep blue sky.

Lady Enna is the Goddess of the Troop.  Her assistant is elfin ziplip Clover, the only four-winged ziplip in the universe.  The Troop that Lady Enna commands consists of highly skilled flying horses called pordonas and expert elf archers that mount them.  Like the pordonas, the archers are taught their skillful warfighting skills at l'Académie de Charmes et Enchantements.  The Academy, as those of us on Spardom refer to it, is located on a high hill next to the Citadel of Tonotolia.  The Citadel is in the extreme southeastern part of the Isle in the Land of Banned Borders.  Lady Camielle is the Academy’s Headmistress or, in the surface earth French language, Directrice.  The Academy not only trains pordonas and their elfin archers, but it also trains creatures of all kinds.  As suggested by the Academy’s name, especially gifted students are taught magical charms and spells.

Spardom folklore declares that pordonas are descendants of the flying horse Comink, the supposed twin of the mythological creature Pegasus.  Comink and a Spardom mare named Korphina had the first pordonas offspring born on Spardom.  They called him Nemiini.  Pordonas are beautiful creatures.  They are as large as surface earth horses with six-foot wings.  Instead of fur on their torsos, they have layer upon layer of feathers.  Despite their feathered wings, they are mammals since they have fur on their foreheads, tails, and powerful legs.  Pordonas are as graceful, courageous, and intelligent as they are beautiful.

You have probably noticed that Lady Enna affectionally referred to her morning dose of coffee.  Like me, she craves her morning coffee, naturally with hazelnut creamer.  Every time she avendiates to surface earth, she carries back to Spardom a large plastic container of instant coffee and, yes, an equally large container of hazelnut creamer.  The term avendiate occasionally referred to avendiating, is to transport oneself through space and time in a matter of seconds.  Lady Enna tries to avendiate to surface earth a couple of times a week.  So, you can imagine how much coffee she carries with her.  Happily, she does not drink all the coffee herself.  If she did, she would be as jittery as a spinning top on a slanted tabletop.  She shares her coffee and hazelnut creamer with Lady Camielle and the Academy’s professors.  She is good friends with all ten of the Academy’s professors.  Just the same, those with whom she is the closest are Professors Taryn, Dianise, Natash, and Dyase.

On Lady Enna’s return trips to surface earth, she carries with her the empty containers for recycling.  Except for the sunken submersible in Lake Namoni that I wrote about in the last adventure, Conquest of the Hidden Valley, no surface earth trash is on Spardom.  That includes plastic containers of coffee and creamer.  Unlike surface earth, which is overflowing with countless tons of floating and buried trash of all kinds, particularly plastic, creatures of Spardom endeavor to keep the Isle as unspoiled and garbage-free as possible.

Now, let us return to the morning raid by members of the Troop.  Like every morning for over a year now, the evil wizard Zarof has forced his sulobaids into action.  The daily morning event is pretty much routine.  Forty or fifty sulobaids attacks Banned Borders from the north and the east.  Sometimes they break into three or four squadrons comprised of ten to fifteen sulobaids.  Sometimes they attack in waves, a few at a time.  The sulobaids are of no great concern since the Goddess of the Troop and the elfin archers dispatch the evil creatures quickly.  We had thought that Zarof would have run out of sulobaids by now, especially considering their high number of daily fatalities.  But, we were very much mistaken.  Zarof now has the magical ability to breed measureless quantities of every sort of imaginable horrible beast to include sulobaids.

Remarkably, there has been only one casualty of the Troop during the preceding year.  The day it happened had started out routine enough.  There was the usual morning attack by sulobaids on Banned Borders.  The Troop set out to destroy the attacking creatures.  Sadly, before the Troop could annihilate the creatures, two sulobaids had managed to terrorize the land.  The sulobaids attacked a few hamlet dwellings and killed four Spardom creatures.

Meanwhile, to the extreme southwest of the Isle, six Forest of Fogreia wood wizards loyal to Zarof had kidnapped sixteen spargnarls and seven areneus.  The wizards intended to deliver the kidnapped creatures to Zarof as tributes.  Once they were far enough into the Desert of Abeti, they planned to use the desert’s elaborate tunnel system to travel to Magigro.  Magigro is where Zarof has his headquarters.

The sixteen kidnapped spargnarls were mere youngsters, perhaps ten to twelve years of age.  They ranged in height from five to six feet.  Each had a rope tied tightly around his or her neck that was attached to that of an another spargnarl.  The affixed ropes eliminated the chance for the spargnarls to escape as the group marched gloomily in a long column.

The seven areneus were baby spiders, huge by surface earth standards – about one foot in length and maybe a one-quarter foot in width, but tiny in comparison to their gigantic grownup parents.  A full-grown areneus is about eight or nine feet in length with a breadth of five feet.  The wood wizard had imprisoned the kidnapped areneus in cages.  I told of my first encounter with areneus in our first adventure, Return of the Princess.

As it pertains to the kidnapped creatures, Lady Enna and her squadron of Troop pordonas were responding to a telepathic thought transference from one of Lady Talya-cees entities.  Queen Lindsial had stationed all eight of Talya-cee entities to various parts of the free lands of Spardom.  The original Talya-cee remained with Queen Lindsial at the Academy.  If you will recall, Talya-cee has multi-location powers, in addition to levitation and apportion powers.  Levitation is the ability to float or fly in the air, while apportioning, as we refer to it here, is the ability to divide oneself.  Using her multi-location power, Talya-cee can apportate into nine distinct entities.  Each can work autonomously from the primary Talya-cee and the other eight entities.

The Talya-cee entity stationed in the Forest of Fogreia had frantically conveyed that the evil wood wizards were marching deeper into the Land of Abeti with the tributes.  “They are nearing the area where I believe their tunnel fissure is.  We tried to stop them, but the sulobaids killed or wounded most of the spargnarls that were assisting me!  I am invisible.  Otherwise, they would have had me as well!  Please dispatch help as soon as possible!”

Lady Enna had visited the crest of Fogreia and Abeti once before.  Thus, she could avendiate close to the area where Talya-cee was referring.  After avendiating, she and the seven pordonas and their elfin archers flew east to the area in question.  The entire process, avendiating, and flying to Talya-cee took the group less than one minute.  Upon their arrival, four elfin archers commanded their pordonas to attack the wood wizards escorting the kidnapped youngsters.  Due consideration was given to ensure the kidnapped tributes were not injured.  The four other pordonas and their riders, which included Lady Enna and her pordonas, attacked the sulobaids.

At that precise moment, the Evil One, Zarof, who commands all wood wizards, sulobaids, and other evil creatures on the Isle, opened the fissure.  At least eighty or ninety sulobaids emerged from the void.  The sulobaids outnumbered the Troop more than ten to one!  The resulting battle was one of total disorder.  Immediately after that, forty or so two-headed, four-armed trolls emerged from the fissure.  Surprisingly, these trolls were extremely proficient archers.  They promptly began shooting at the vastly outnumbered pordonas and their riders.  One arrow barely missed Lady Enna by mere inches.  Her pordonas, Spirit, had detected the incoming arrow and abruptly shifted his mass.  Lady Enna had almost fallen off his back in response.  Fortunately, she survived to tell the tale, thanks to her agile, highly skilled flying horse.

Then the unthinkable happened.  A disciplined line of at least twenty of the trolls zeroed in on one of the Troop’s pordonas and its rider.  Arrows flew simultaneously in the air.  The deadly volley of arrows hit the pordonas and its rider.  The pair dropped to earth like a stone.  A few seconds later, a second line of trolls hit another archer and his pordonas.  Luckily, this pordonas in some way remained airborne.  He flew to the east for at least a half-mile.  Finally overcome by his wounds, he slowly descended from the sky and safely landed.  Though seriously wounded, both the pordonas and the elfin rider eventually recovered and would exchange blows with evil yet again. 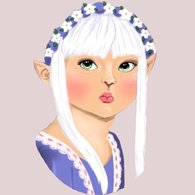