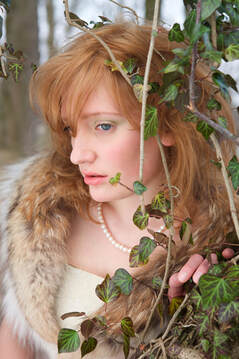 Eva Roblins is a product of my vivid imagination.  As a writer, I wanted to pay tribute to a young girl whom I had met while working as a roller rink floor guard.  The girl's name is Eva.  She is both deaf and blind.
When I first met Eva, she was roller-skating with her brother.  I recall that I was awestruck by Eva's courage and her love of life as she gleefully laughed as she skated, all the while lovingly holding onto her brother's arm.  Such audacity - such courage - amazingly inspirational!
I gave Eva a stuffed animal,  a small token of my respect and admiration for the way she moved my heart that day.  A couple years later Eva had returned to the roller skating rink.  She was skating once more.  As I talked with her brother, Eva touched my face with her hands to find out who I was.  She said clearly, "You are the man who gave me the stuffed animal.  I still have it!"
From that point on, I worked to commemorate Eva's remarkable life - through my writings.  As a result, Eva Roblins, a deaf redheaded woman (I happen to be a ginger as well) was born into the fictional world of journalistic wonders.  I also decided to use Eva Roblins as my pseudonym author name whenever I pen stories and poetry.  Some time ago, I lost (hopefully temporarily) a good friend. Hence, until we are reunited once more, I will no longer pen stories using my pseudonym. Instead, I will publish novels using my given name.
PS - I am writing this today as a token of appreciation and absolute respect for a wonderfully talented, exceptionally intelligent young lady friend of mine who asked me point blank, "Why do you write under the name Eva Roblins?"  In all these years, she is the first person to ask me that question.  Pretty awesome!
Thank you, Diana Jane - this one's for you - 3 squeezes of your hand!
Click to read excerpts of Eva's Diary 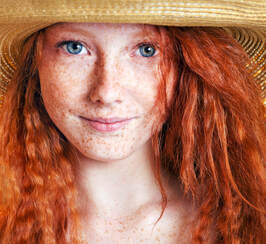 Eva Roblins, author of the Adventures of Eva Roblins writings, was born in a magical land where adorable faeries and handsome sprites come alive for those who believe in make-believe and dreams come true.
Eva's first recollections were of being lulled to sleep by a whispering watermill as it ground grain into flour; songbirds singing vociferously in flowering Springtime leaves; humming honeybees collecting nectar from daffodils, bluebell, crocus, and gladiolus; gleeful shouts of children swimming in the creek athwart the fence across the way.
In stark contrast to her charming birthplace, Eva lived a nomadic lifestyle for nearly ten years as a child.  Her home was her parent’s dilapidated car, Blue Betsy, and the rare one-month rental.  Even so, she had powerfully memorable adventures, perhaps explaining why she is now an adventuresome risk-taker who cannot stay put in one place for more than a blink of an eye.
Deaf at the age of fifteen from an illness that left her in a coma for three weeks, Eva’s ability to hark to nature’s sounds vanished forever.  Never again would she hear laughter, echoes, crashes, splashes, or even her own voice.  Still, she learned to listen attentively to the careful aim of a quill, the thrust of a pencil, the stroke of a brush, the purpose of a carefully crafted line, and the molding of a skillfully bespoken sculpture.  Henceforward, art and the written word became Eva’s music, their inspiring creators her maestros, their awesomeness her silent world’s hullabaloo.
Eva’s incredible journalistic career began when she was only nineteen.  Her first assignment was investigating officials allegedly involved in an international human trafficking organization.  Along with Cindy Wickham, her surrogate mother, mentor, and long-time friend, she pursued lead after lead.  Eva ultimately volunteered to infiltrate the organization.  Naïve, youthful, and untried, she placed her life in mortal danger.  Fortunately, she escaped, but only with by the cunning of her intuition and thanks to karma.  A few years later found Eva serving as an agent of the Central Intelligence Agency (CIA).  Her work with the CIA brought her face-to-face with lying, stealing, unsavory international criminals.
Eva travels extensively, zipping around the world on assignments.  She loves chitchat, and she enjoys posting her adventures.  While some stories are Eva’s subjective experiences, she carefully authors her stories into pure fiction.  She considers it irresponsible to do otherwise, to say things that are better off unsaid, controversial topics that may affect national security.  Besides, Eva is a trite vulnerable, so her private world is sacrosanct.
Some refer to Eva as a mysterious, redheaded mystagogue, owing to her cloak of secrecy in a world of gaping openness.  Nonetheless, she is persnickety and therefore faithful to all whom she befriends, never forgetting to say, “I love you.”  Because she does.  Just like me.
Click to read excerpts of Eva's Diary
Proudly powered by Weebly